The Glut of Recorded Chatter 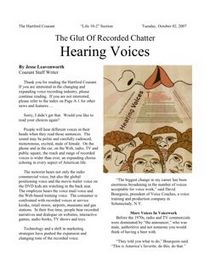 The Glut of Recorded Chatter
By Jesse Leavenworth | October 2007

Thank you for reading the Hartford Courant. If you are interested in the changing and expanding voice recording industry, please continue reading. If you are not interested, please refer to the index on Page A-1 for other news and features …

Sorry, I didn’t get that. Would you like to read your choices again?

People will hear different voices in their heads when they read those sentences. The sound may be polite and carefully cadenced, monotonous, excited, male of female. On the phone and in the car, on the Web, radio, TV and public square, the reach and range of recorded voices is wider than ever, an expanding chorus echoing in every aspect of American life.

The motorist hears not only the radio commercial voice, but also the global positioning voice and the movie trailer voice on the DVD kids are watching in the back seat. The employee hears the voice mail voice and the Web-based training voice. The consumer is confronted with recorded voices at service kiosks, retail stores, airports, museums and gas stations. In their free time, people hear recorded narratives and dialogue on websites, interactive games, audio books, TV shows and toys.

Technology and a shift in marketing strategies have pushed the expansion and changing tone of the recorded voice.

“The biggest change in my career has been enormous broadening in the number of voices acceptable for voice work,” said David Bourgeois, president of Voice Coaches, a voice training and production company in Schenectady, N.Y.

More Voices In Voicework
Before the 1970s, radio and TV commercials were dominated by “the announcer,” who was male, authoritive and not someone you would think of having a beer with.

“They told you what to do,” Bourgeois said. “This is America’s favorite; do this; do that.”

Today, professional voice actors are about evenly split between make and female with a wide variety of tones, styles and accents. The product selling voice has branched from the smooth announcer (think of Gary Owens on the TV show “Laugh-In”) to the girl next door or the guy on the next stool.

“It’s all about believability and comfort nowadays,” said Marcus Graham, head of Georgia-based GM Voices. “It’s a testamonial that sounds like the girl down the street, rather than a big booming announcer that pronounces every work precisely, but there’s no sincerity in the delivery.”

This shift toward the get-real delivery has opened more opportunities for voice actors, because the voice that sells sports cars or video games is not the same voice that an airline wants for its phone system.

Graham, whose company produces recorded voices for corporation phone systems, the Web and other media, calls the matching of a voice to a company “voice branding.” He wrote a book on the subject called “Voice Branding in America” (2005, Vivid Voices Inc.)

“With the telephone, computer and television morphing into similar multifunction devices due to digital convergence, a company’s voice brand is being heard on websites, multimedia CD ROMs, kiosks, cards, point-of-purchase devices, and who knows what else.”

Digital technology also has broadened opportunities for voice actors. In years past, much of the recording for commercials and other voiceovers was done in Los Angeles or New York City. Today, many voice actors record in home studios and deliver their work electronically. The cost for a home studio varies, Valentin said, but the set-up doesn’t have to be expensive. Requirements include a quite room; a computer with minimal fan noice (liquid-cooled is the best choice, Valentin said); a microphone; a headset; and processing software such as Adobe Audition.

Not everyone can be a voice actor, producers and instructors say.

“It’s art and science,” Graham said. “Do I believe it? Does it match the story that’s trying to be told. You can’t put this stuff on a spreedsheet.”

Competitive Business
Experts agreed that those interested in the field should get training and be willing to take direction just as a stage and film actor must. And don’t quit the day job. While some voice actors can make substaintial money, others will struggle (to get an idea of the marketplace for voices, visit www.voices.com or www.voice123.com).

Product endorsements are only a small part of the soundboard these days, Bourgeois said. Much of the voice recording now goes directly to company-training websites, tourism, audiobooks, educational materials, documentaries and a wide variety of other applications.

The good news for those who “crack the nut,” as Bourgeois put it, is the ability to make hundreds of dollars an hour. He said he was working with a voice actor recently who was to be paid $400 for about half hour’s work. Some people make $30,000 to $50,000 a year just from voice recording they do with his company, Graham said. “It’s a good time to be a talent,” he said.