Something to Talk About 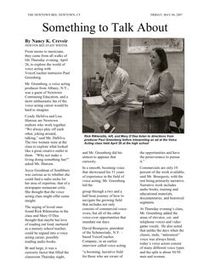 Something to Talk About
By Nancy Creveir | May 2007

From moms to musicians, they came from all walks of life Thursday evening, April 26, to explore the world of voice acting with VoiceCoaches instructor Paul Greenberg.

Mr. Greenberg, a voice acting producer from Albany, N.Y., was a guest of Newtown Continuing Education, and a more enthusiastic fan of the voice acting career would be hard to imagine.

Cyndy DeSilva and Lisa Hintzen are Newtown realtors who work together. “We always play off each other, joking around, talking,” said Ms. DaSilva. The two women were at the class to explore what looked like a great creative outlet to them. “Why not make a living doing something fun?” asked Ms. Hintzen.

Joyce Goodman of Southbury was curious as to whether she could find a radio niche for her area of expertise, that of a newspaper restaurant critic. She thought that the voice acting class might offer some insight.

The urging of loved ones found Rick Rikteraitas in the class and Mary O’Dea thought that maybe her love of reading out loud, nurtured as a nursery school teacher, could be segued into a voice acting career, possibly reading audio books.

Bt and large, it was a curiosity factor that filled the classroom Thursday night, and Mr. Greenberg did his utmost to appease that curiosity.

In a smooth, booming voice that showcased his 31 years of experience in the field of voice acting, Mr. Greenberg led the group through a two and a half hour journey of how to navigate the growing field that includes not only consists of commercial voice-overs, but all of the other voice-over opportunities that inundate our days.

David Bourgeois, president of the Schenectady, N.Y. –based VoiceCoaches Company, in an earlier interview called voice acting “a booming, lucrative field for those who are aware of the opportunities and have the perseverance to pursue it.”

Commercials are only 10 percent of the work available, said Mr. Bourgeois, with the rest being primarily narrative. Narrative work includes audio books, training and educational materials, documentaries, and historical segments.

At Thursday evening’s class, Mr. Greenberg added the areas of elevator, car, and telephone voices and video game vocals. He also noted that unlike the days when the classic, male, “announcer” voice was always hired, today’s voice actors consist of many different voice types and the split is about 50/50 men and women.

“If voice acting is your dream, get out there and get it,” Mr. Greenberg encouraged the attendees. “I’m here because I did it.” Voice acting must be approached as a small business, however, he warned, “Write down your goals and do it. Take it seriously,” he urged. “You are your own worst competition, so just do it. If you put road blocks in front of yourself, this might not be the field for you.”

He then offered many tips on what to expect in a professional recording studio and how to prepare for a voice acting part, including the opportunity for students to read and be guided by his expertise on the microphone.

Confidence is paramount in obtaining a job and getting other voice acting jobs, said Mr. Greenberg, as is the ability “to spontaneously read unfamiliar copy with expression while taking direction,” a mantra repeated more than once during the course that evening.

Mr. Greenberg kept the class laughing as he navigated through the course material and touted the advantages of the voice acting career. “What to know what to wear to the studio? Wear your bathrobe!” he exclaimed. “I don’t care what you’re wearing. I want your voice!”

A flexible schedule in a relaxed atmosphere and good pay for experienced voice actors make voice acting a fun and rewarding business, Mr. Greenberg said, for those willing to work it. “And tell me, what other business can you think of where age can be your friend?” he asked. “Your vocal range increases as you get older, and that is a plus in this business,” he said.

Training and putting together a professional audio demo is the first step to getting a foot in the door. In written material Mr. Greenberg supplied to the class, the admonition that “an unprofessionally recorded or produced [demo] is exactly like presenting a written resume with spelling errors and unclear information,” expressed what he emphasized to the class.

His practical advice also included how to turn one job into more jobs. “After you get a job, you go to the studio to record and what do you do? You work the crowd, that’s what. You meet everyone there, you stop at the secretary’s desk on the way out and you get contact information.

Then do you go home? No. You go to Hallmark and you get yourself a pack of those little thank-you cards and you send them to everyone whose contact information you have and who you just introduced yourself to,” explained Mr. Greenberg. Like so many other businesses, familiarity will land the job, and the voice actors must make themselves known.

Focusing on the positives of the job, Mr. Greenberg offered nonstop encouragement, even noting that despite the fact that most people who attempt voice actingdo not end up making a career of it, that every business has as much as a 70 percent failure rate and that fear of failure should not be a stumbling block.

The overview offered Thursday evening was not meant to prepare people to get a job. Professional coaching is usually required, said Mr. Greenberg. But for those who found the information exciting, he said, “If you love it, you have to do it. And you must love it. Don’t do it for the money alone.”