Need a Job? Speak up! 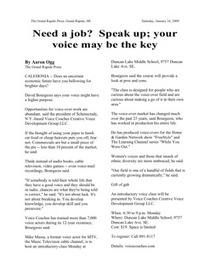 CALEDONIA — Does an uncertain economic future have you bellowing for brighter days?

David Bourgeois says your voice might have a higher purpose.

If the thought of using your pipes to hawk cat food or cheap haircuts puts you off, fear not. Commercials are but a small piece of the pie — less than 10 percent of the market, he said.

“If somebody is told their whole life that they have a good voice and they should be in radio, chances are what they’re being told is correct,” he said. “It’s not about luck. It’s not about breaking in. You develop knowledge, you develop skill and you persevere.”

Bourgeois said the course will provide a look at pros and cons.

The voice-over market has changed much over the past 25 years, said Bourgeois, who has worked in production his entire life.

He has produced voice-overs for the Home & Garden Network show “FreeStyle” and The Learning Channel series “While You Were Out.”

Women’s voices and those that smack of ethnic diversity are more embraced, he said.

“Our field is one of a handful of fields that is currently growing dramatically,” he said.

← Talking in Class
In Support Of Pirates! →
RSS Subscription