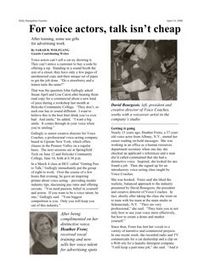 Voice actors can’t sell a car by showing it.  They can’t entice a customer to buy a soda by offering a sip.  Standing in a sound booth the size of a closet, they have only a few pages of unrehearsed copy and their unique set of pipes to get the job done.  “Do a strawberry and a lemon taste the same?”

That was the question John Gallogly asked Susan April and Lisa Caron after hearing them read copy for a commercial about a new kind of juice during a workshop last month at Holyoke Community College.  “They don’t, so each one has to sound different.  I want to believe this is the best fruit drink you’ve ever had.  And smile,” he added.  “I want a big smile.  It comes through in your voice when you’re smiling.”

Gallogly is senior creative director for Voice Coaches, a professional voice-acting company based in Upstate New York, which offers classes in the Pioneer Valley on a regular basis.  The next sessions are at Springfield Tech on June 12 and Holyoke Community College, June 16, both at 6:30 p.m.

In a March 4 class at HCC called “Getting Pais to Talk,” Gallogly immediately put the group of eight to work.  Over the course of a few hours that evening, he gave an inspiring primer about voice acting – providing insider industry tips, discussing pay rates and offering caveats.  “You need passion, belief in yourself and action.  If you want to be a voice talent, be one,” Gallogly said.  “Your biggest competition is you.  Only you will keep you out of this industry.”

Getting it going
Nearly 15 years ago, Heather Frenz, a 37-year-old voice actor from Albany, N.Y., started her career reading on-hold messages.  She was working in an office as a human resources department secretary when one day she checked an applicant’s references and a man she’d called commented that she had a distinctive voice.  Inspired, she looked for ans found a job.  Then she signed up for an introductory voice-acting class taught by Voice Coaches.

She was hooked.  Frenz said she liked the realistic, balanced approach to the industry presented by David Bourgeois, the president and creative director of Voice Coaches.  In fact, shortly after taking the class she went on to train with his team at the main studio in Schenectady, N.Y.  “They are very professional,” she said.  “They train you in not only how to use your voice more effectively, but how to create a demo and market yourself.”

Since then, Frenz has lent her vocals to a variety of narrative and commercial projects.  In one recent week, she recorded radio and TV commercials for a car dealership and a clip on a Web site for a laundry detergent company.  “I still keep a part-time job,” she said.  “And it varies how much I make doing voice-overs, depending on how saturated my voice gets out there.  But I make good money, and I’ve had work consistently for the past eight years.”

For more than 25 years, Bourgeois, 42, has worked in professional music and audio production.  He started out as a musician during his teen years, playing his own material and recording on other musicians’ albums, and eventually transitioned to the production end.  Since 1990, he has promoted conversational-reading training methods.  Gone are yhe days where only guys with announcer-like deep voices can get jobs, he said.  Now the industry has changed.  The definition of an appealing voice has become both male and female, and one that’s intimate, authentic and natural.

He created Voice Coaches based on his experience with voice talent that didn’t quite know how to operate in the vocal booth.  He saw a need for one-on-one training to improve professionalism and marketing.  “There’s a flawed mentality – gotta make a demo first,” Bourgeois said.  “But the first step is education, not a demo.  I know if I look across a half million dollars worth of equipment whenever I have a professional or not.  I’ve seen people who have made a great demo and then can’t deliver.”

While Gallogly and Bourgeois recommend education before making a demo, Gallogly said they listen to all of the material they receive, whatever the quality.  “The maximum length is a minute and 30 seconds,” Gallogly said.  “You’ve lost a listener after that.  The tracks can be diverse only if you are, but not if your not.  Do what you do best and that’s it.”

To create a demo, Gallogly stressed the importance of using license-free copy and recording on equipment that produces a network-quality product.  Two tracks – about one minute to a minute and a half for several commercial clips and the same for narration – are all that are needed on a CD.  Narrative clips need to be longer and fewer.  “There are two types of voice work: commercial and narration.  Ten percent of the field in commercial,” Gallogly said.  “My advice is don’t put 100 percent into commercial, or you’ll fail.”

One problem.  Anybody who can read aloud wants to do voice-overs, especially when money is discussed.  For a 30-60 second spot, a beginner may make between $150 and $350, Gallogly said.  A seasoned pro makes approximately $300 for 15 minutes.

After completing training and putting together a demo, the next step is getting hired.  Gallogly said one way to start is to call a company and ask to talk to their audio visual, or AV, department.  If a company has one, chances are they do their commercials and training materials on site.  Frenz advised newcomers simply to type in “production companies” or “voice-overs” into Google or read reputable trade magazines for job postings.  “And for me what’s also worked well is talking to people locally – networking,” she said.

Another way to get clients to notice you, Bourgeois said, is to create an online profile at www.voices.com.  That way, people can showcase their skills and clients can review them – without going through an agent.  David Ciccarelli, 29, hatched the idea for the Web sire in 2003 with his wife, Stephanie, and launched it in 2004.  It now posts 50,000 online profiles.  In 2006, the Business Development Bank of Canada nominated the Ciccarelli’s for the Young Entrepreneur Award.

The next “Getting Paid to Talk: session will be held April 17 at Springfield Technical Community College.  People can sign up through Mary Breeding in the Continuing Education department at STCC by calling (413) 755-4501.