For this week’s Voice Overs of the World, I want to look at the advertising for the EA Sports Active Game for the Nintendo Wii (hereafter called simply the Wii Active, as it’s commonly known). Below is the full-length commercial for the game, and I think it has some rather neat voice over aspects to it.

First off, I think it’s important to realize that not every woman you see on screen is the same woman who’s providing the voice. This commercial was probably cast in two separate sessions: an on-camera casting call for women who fit the “fitness profile” that EA Sports/Nintendo was looking for, and separate casting for the Voice Overs, in which they found the women who’s voices represented the physical versions on screen to their utmost potential and had the creative skills to deliver their line the way the producers wanted it. Just because a woman on screen is in shape and looks great while exercising doesn’t mean she can deliver well-read copy. Now, I’m not saying that maybe some of these women didn’t appear on camera and provide their own voice over, but chances are really good that who you’re hearing and who you’re seeing are not the same person.

I like the different deliveries each of the voices provide, too. From the playful tone of “I’m active… for date night” to the confidence of “I’m active… for me,” each voice actor brings a little something different to their single line. I was also impressed that the “narrator” voice that comes in at the end that says, “EA Sports’ Active: A personalized workout program for the Wii,” is a woman. While the video game in this ad is clearly being marketed to women, it’s a game that men can play, too.

Keep in mind that EA sports has one of the most famous voice overs on TV, with the “EA Sports: It’s in the Game” tagline that finishes every commercial they do (you can hear it above!). So to come in here and change that well known tagline to something more feminine is a strong strategy, and the talent behind that part of the commercial has a cool, slightly raspy kind of voice; she sounds sporty and confident, and that’s clearly what EA Sports & Nintendo are trying to appeal to here.

Finally, I should point out the voice acting in the game itself. I’ve been using this game at home with my wife to work out, and the entire game is filled with voice over. 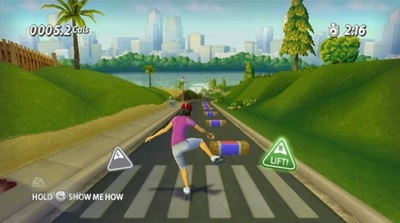 From the instructional tutorials before each exercise to the voice of the fitness guru who leads you through each exercise (spouting such nuggets as “Way to go, player 2!”) there is a lot of VO in this game. We’ve personally only heard the female voice so far (probably because my wife is the main profile in the game), but I understand that with a man as the primary profile, the voice over and tutorial instruction is all provided by a male voice. All in all, it’s a pretty comprehensive project that probably involved quite an intensive recording session — or more likely, several sessions!

This entry was posted in Voice Overs of the World. Bookmark the permalink.