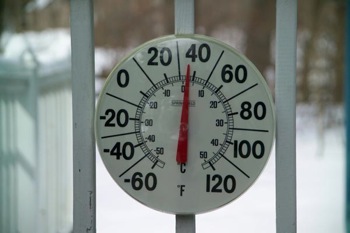 I’m fascinated by obscure bits of history. The Boston Molasses Disaster? I’m there. The fact that the first successful parachute jump in history happened on my birthday in 1919? Cool!

So I found the Great Blue Norther of 11/11/11 quite an interesting piece of forgotten history. It turns out that exactly 98 years ago today, a freak storm front moved across the midwestern part of the country that resulted in some of the most extreme weather changes in history. For example, Springfield, Missouri hit midday temperatures of 80 degrees, and finished the day with temperatures of 13 degrees. That’s a 67-degree drop in one day! It was the first time since records had been kept that the record high and record low were broken in the same day.

That kind of change reminds me of what it’s like to market yourself as a voice talent. In what seems like one day, you can go from a record high to a record low. In actuality, marketing yourself is a constant effort, and you never know when those efforts are going to pay off. In some cases, it can seem to come all at once. One of my co-workers is actually in the midst of being almost overwhelmed by the amount of voice over jobs he has on his plate right now. Up until a month ago, however, he hadn’t done a professional job in about two months. Record low, meet record high.

I know many, many working voice actors who go through similar “feast or famine” periods in their marketing efforts. Unfortunately, some of them get discouraged during the “record low” periods and forget that there can be a “record high” right around the corner. If weather can change by 67 degrees in a single day due to a freak storm, who’s to say the same thing can’t happen to you? You’d be surprised how common it is for voice over actors to go through long stretches where they can be either incredibly busy or where it seems like they’re sitting around twiddling their thumbs for days on end. The important thing to remember is to make the most of your time. If you’re in a cold snap, why not use that time to try some new marketing efforts and send out some more demos?

Instead of looking at a slow period as a reason to quit, try using it to get motivated and turn the downtime into a way to create future work for yourself. You never know when you might find yourself in the middle of an extreme temperature change and find the winds blowing in your direction.

This entry was posted in Motivation. Bookmark the permalink.