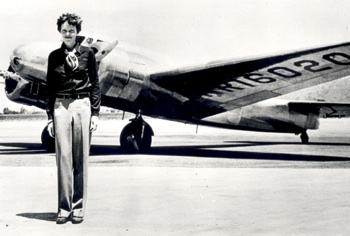 As I was posting some information on the Voice Coaches Twitter Page today, I came across this little tidbit of information:

Intrigued by this factoid, I decided to do some research and I found out that today is the 77th anniversary of Amelia Earhart becoming the first woman ever to fly a solo non-stop transcontinental flight. Not only did she set that record, but she also set the woman’s solo transcontinental speed record, flying 2,447.8 miles in 19 hours, 5 minutes.

But believe it or not, those aren’t the facts that impressed me. No, what impressed me was the fact that Amelia Earhart’s husband was George Palmer Putnam, a famous (and very wealthy) publisher. In fact, Putnam Publishing is still one of the largest publishing houses in the world today.

What that means is that Amelia Earhart was a woman that was married to a rich, famous publishing magnate and who decided to fly across the entire country all by herself in a time when women who were married to rich, famous publishing magnates simply did not do things like fly across the entire country all by themselves. Just 12 years after women in the United States got the vote, Ms. Earhart decided that instead of staying at home being a socialite, she would venture out into the relatively new (and rather dangerous) field of aviation and set numerous records.

Why would she choose to do that? I think the answer is very simple: she needed to. She wanted to. This was a woman with an adventurous spirit; it’s quite clear by her actions and her flying history and records that she would never have been happy doing anything other than what it was she was meant to do. She needed to fly, and she clearly wasn’t going to be happy being second best to anyone.

So if Amelia Earhart could go against what was socially accepted and venture out into a new and dangerous territory because she was driven to do so, what’s stopping the rest of us? Why is it so hard to find that time every day to spend a few minutes marketing ourselves? Where’s the spirit of adventure as we journey into an exciting new career path?

I don’t know the answer to those questions. I’m not sure why people let their marketing efforts somehow fall by the wayside, and then wonder why they aren’t getting more voice over work. I’m not sure how to remind people that it’s persistence and a “stick to it” attitude that gets you ahead in the voice over field (or any worthwhile endeavor, for that matter), or that success doesn’t happen overnight, and it only happens to those who really persevere.

But I can tell you one thing: If Amelia Earhart were alive today and decided to become a voice over artist, I have no doubt that she’s quickly become one of the most successful voice actors around.

This entry was posted in Education, Motivation. Bookmark the permalink.